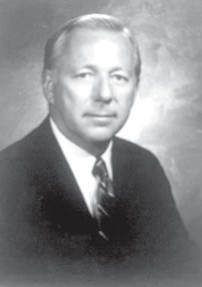 Bill was born on September 22, 1928 in Columbus, Ohio to Louise and William F. Spengler II. He lived in Columbus for the next 23 years. Bill began working summers at age 16 when he started his own paint company, a business that grew quickly and provided him with the finances he needed for college. He entered Ohio State in 1946 with his parents’ goal of staying two years, instead he stayed five years. While in Ohio, he served as President of Alpha Tau Omega, his social fraternity, along with the Alpha Kappa Psi and Beta Kappa Psi volunteer fraternities. In 1950 he graduated with a bachelor’s degree in accounting. At the time, Ohio State was experiencing a post-war influx of students and understaffed faculty. As a result, Bill was hired by the university to teach accounting, a position that didn’t pay very well but allowed him to go to school for free. This gave him the opportunity to complete his MBA studies a year later.

That same year he married Sarah M. Burd, his high school sweetheart who had just graduated from Ohio State with a degree in education. They remained married for 70 years and have four children (Bill, Mary, John and Carolyn), eleven grandchildren and four great-grandchildren, one of whom is named William F. Spengler. After his marriage, Bill began his corporate career with a unique one-man training program at Owens-Illinois. At the time, OI was one of the top 100 companies in the United States and he stayed with them for the next 34 years.

1) To fulfill his two-year military commitment. He spent his freshman year in Ohio auditing major military contractors in the United States. In his sophomore year, he was stationed in Germany, where he became auditor general of two air bases, a position previously held at the rank of colonel.

2) To work full-time for the Governor of Ohio and help found and direct the Little Hoover Commission. The team grew to over 100 business people and saved the state millions of dollars. Ronald Reagan, then Governor of California, formed a similar commission due to their success.

3) Become a managing director of United Glass, PLC in England. Here he was the only American in a company run by an all-British board and listed on the London Stock Exchange. He led the company through a turnaround that went from a significant loss to a profit within three years. His wife and four children joined him in England, it proved to be a great family experience.

Due to his accounting background, his initial positions at Owens-Illinois were in finance. He quickly rose through the ranks and at the age of 32 became the youngest controller in their history. He then became VP of Corporate Planning and after his time in England he was appointed President and COO of International Operations. Just a few years later he became President and COO of Domestic Operations. His last position at OI was as Vice Chairman and Chief Administrative Officer, Bill took early retirement in 1986.

Shortly after leaving Owens-Illinois, Bill joined as Vice Chairman of Distillers Corporation, PLC, a UK company that manufactured, bottled and distributed Scotch and Gin products worldwide. As the world’s leading producer of Scotch, they had brands such as Johnny Walker, Dewars and Haig, while their gin brands included Gordon’s and Tanqueray. Shortly after joining the company, it received takeover bids and Bill quickly became the company’s main spokesman in a very public competition with Guinness. Meeting frequently with a room full of British reporters was a unique experience for him, as after the Guinness takeover, Bill retired for the second and final time at the age of 58.

Bill’s professional career has been complemented by his numerous contributions to charities such as the Boy’s Club, the Red Cross and others, as well as by time spent on various boards of well-known companies. Among other things, he directed the inaugural “Jamie Farr Classic,” an LPGA Tour charity event that continues to this day. Bill was also the president of three country clubs; the Toledo Country Club, the Birchwood Farms Club in Harbor Springs and the Country Club of Florida, where he lived with his wife Sarah for over thirty years.

Bill enjoyed golf, fly fishing and tennis, although in his own words he usually played at a “very modest level”. Above all, he was a great husband, father and grandfather who leaves behind a loving family and many friends who will miss him dearly.

In accordance with his wish, the family is asking that you consider making a donation to the Sarah M. and William F. Spengler MBA Enrichment Fund, a link to which is as follows: : Make your donation to Ohio State University ( osu.edu)